‘We are not a virus, we are human beings.’ Trump’s China bashing could alienate Asian-American voters 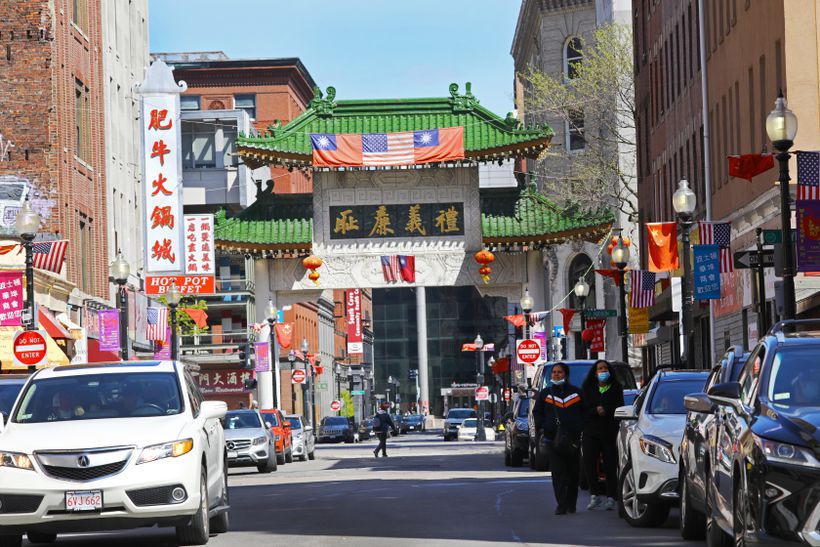 ‘We are not a virus, we are human beings.’ Trump’s China bashing could alienate Asian-American voters

WASHINGTON — In Chinatowns from Boston to San Francisco, restaurants and markets saw their business dwindle last winter well before any coronavirus cases had surfaced in the United States because of false claims that Asians spread the virus. Then, as the pandemic struck the nation, the dirty looks, insults, and innuendos gave way to assaults and beatings.

For Asian-Americans and Pacific Islanders, the outbreak has another dimension that can’t be stopped by social distancing and personal protective equipment.

“We are not a virus,” said Vanna Howard, a candidate for Massachusetts state representative and a member of the state Asian American Commission. “We are human beings.”

Now, as President Trump and Republicans blame China for the coronavirus outbreak, Asian-American leaders and political groups are scaling up efforts to push back against a rising tide of anti-Chinese sentiment they said hurts all people of Asian-Pacific descent.

They’re also urging presumptive Democratic presidential nominee Joe Biden not to do his own pummeling of China in responding to political attacks that he has been soft on the country. That means he will have to tread carefully to avoid alienating Asian-American voters, a fast-growing slice of the electorate that increasingly leans Democratic and could be pushed further left by Trump’s China bashing.

“What you want to avoid is a dynamic about who is tougher on China,” said former Democratic presidential candidate Andrew Yang, who has endorsed Biden. “That is a distraction from Trump’s mishandling of the crisis.”

With polls showing Americans’ negative perceptions of China have increased since the virus originated there, Trump and his allies have sought to make China a scapegoat for the pandemic and, some analysts fear, a new focus for Trump’s anti-immigrant message in an election year. One Trump campaign ad drew outrage by including Gary Locke, the former US ambassador to China and an Asian-American, in an ominous-looking montage of Chinese officials pictured with Biden.

Asian-American leaders say those attacks often conflate the Chinese government with the Chinese people as well as Chinese-Americans, Asian-Americans, and Pacific Islanders more broadly. Biden has denounced anti-Asian vitriol, and on Monday accused Trump of fanning the “familiar forces of hate, fear, and xenophobia” that the pandemic has unleashed.

AAPI Victory Fund and other prominent Asian-American civic associations have endorsed Biden, but the former vice president also has come under fire from advocates as he seeks to reject Republican attacks of his record and ties to China.

Some 60 progressive Asian-American organizations last week published an open letter to Biden on Medium regarding an ad released last month. The ad said Trump was unprepared for the crisis but also implied the United States could have been helped by a stricter ban on Chinese travelers, using images of Chinese people that the groups said fed into “the right’s core narrative strategies” portraying foreigners as dangerous. Biden’s campaign quickly stopped running the ad last month, and subsequent ones have been recalibrated with advice from Asian-American leaders.

“We understand that both campaigns are going to make China a centerpiece of their campaigns, with both sides accusing the other of being soft on China. But the question is: How you do this?” said California Representative Judy Chu, chairwoman of the Congressional Asian Pacific American Caucus. “Every time there is an attack on China, it should be on the government, and more precisely, the Chinese Communist Party.”

The tough talk on China could hurt candidate appeals to a small population with outsized impact in key swing states. Asian-Americans are the fastest-growing racial or ethnic voter bloc in the United States, with more than 11 million people able to cast ballots in November. More than two-thirds are naturalized immigrants, accounting for the electorate’s rapid growth, according to a Pew Research Center analysis.

Asian-American voters — a diverse group encompassing more than 50 ethnicities and including Indian, Filipino, and Korean-Americans — have not been a major political focus, partly because of numbers and because families of Asian descent tend to live in largely Democratic and noncompetitive districts. But they have power in tightly contested battleground states, increasingly supporting Democrats amid Republicans’ hard-line stance on immigration and harsh rhetoric toward China.

Asian-American and Asian-Pacific Islanders overwhelmingly voted for Democratic nominee Hillary Clinton in 2016. But the group flexed its most muscle in the 2018 congressional midterm elections, helping Democrats win long-held Republican seats in Nevada, Virginia, and California.

“In 2018, we saw the biggest leftward swing of our community, and that was in spite of the fact that there was very little outreach from campaigns, from parties, or even from other institutions like labor,” said Alvina Yeh, executive director of the Asian Pacific American Labor Alliance.

There was great optimism for Asian-American voters heading into 2020. Three candidates of Asian- and Pacific-Islander heritage — Yang, California Senator Kamala Harris, and Hawaii Representative Tulsi Gabbard — ran for the Democratic presidential nomination, and a new generation of Asian-Americans was expected to help boost voter turnout. Voter mobilization groups had planned massive ground efforts this year to register voters and court Asian-Americans at community centers and events, such as Lunar New Year celebrations.

But the pandemic has forced organizations to shift to digital operations, all while Asian-American neighborhoods have been hard hit by the economic crash and reports of discrimination.

After the Ohio university she was attending shut down, Joan Dotruong, 19, of Dorchester, moved back in with her parents, both factory workers in the predominantly Vietnamese community of Fields Corner. Like most families, they’re focused on staying financially afloat, she said. But she plans to work on outreach efforts to Asian-Pacific voters in her neighborhood this summer and has already seen clashes over attitudes about China between younger, more liberal Vietnamese residents and an older, conservative Vietnamese generation.

The China bashing affects her community “because whenever we step outside into another environment, there is always a misconception that all Asians are Chinese,” Dotruong said.

Trump initially tried to brand the disease “the Wuhan virus,” referring to the city where it first surfaced, and lately has blamed China for not containing the outbreak. Last week, Trump told Chinese-American reporter Weijia Jiang to “ask China that question” after she inquired why he was so focused on comparing the US coronavirus testing to other nations.

After backlash for the tense exchange, Trump attempted to assuage criticism the next day with a tweet: “Asian Americans are VERY angry at what China has done to our Country, and the World. Chinese Americans are the most angry of all. I don’t blame them!” But he’s continued to hammer away at China since, including tweeting Wednesday that the “incompetence of China” was responsible for “this mass Worldwide killing!”

Ken Farnaso, deputy press secretary for the Trump campaign and a first-generation Filipino-American, said Trump had explicitly called on Americans to protect Asian-Americans in March and that, “to insinuate otherwise is a disingenuous attempt to attack our president and breed uncertainty.”

But many Asian-American leaders said Trump’s rhetoric toward China called to mind the harsh talk and falsehoods that led to an 1882 law that suspended Chinese immigration to the United States and to the internment of Japanese-Americans during World War II. Some see parallels to the hate crimes against Muslim-Americans after 9/11, and to Trump’s stoking of racial and ethnic animosity against Latinos during the 2016 presidential campaign, rhetoric that many believe underpinned a domestic terror attack in El Paso last year that killed 23 people.

“It is a very harmful and damaging situation when the president of the United States is the one giving voice to this scapegoating and hate and racism,” said Connecticut Attorney General William Tong, a Democrat who last year became the first Chinese-American ever elected as a US state attorney general.

He and other Asian-American leaders hope the pandemic and racial animosity will not deter Asian-Americans from voting. So, far it hasn’t kept Howard from running her campaign in Lowell, only firing her determination to see more Asian-Americans and women elected, she said.

As Massachusetts went under lockdown, Howard collected more than 300 signatures to get on the ballot, holding drive-by signings and leaving forms in bags on porches to practice safe social distancing. At the same time, she helped organize a press conference in March outside the State House to condemn anti-Asian hostility.

She was 11 years old when she arrived in Lowell in 1981 after fleeing the Khmer Rouge regime in Cambodia, which killed her father, three younger siblings, and both maternal grandparents. Now, Howard said, is the time to step up and remind people of Asian-Americans’ contributions to society after overcoming so much hardship.

“We are trying to let people know that this is racism toward Asian- Americans, and we need to push back on this,” she said.