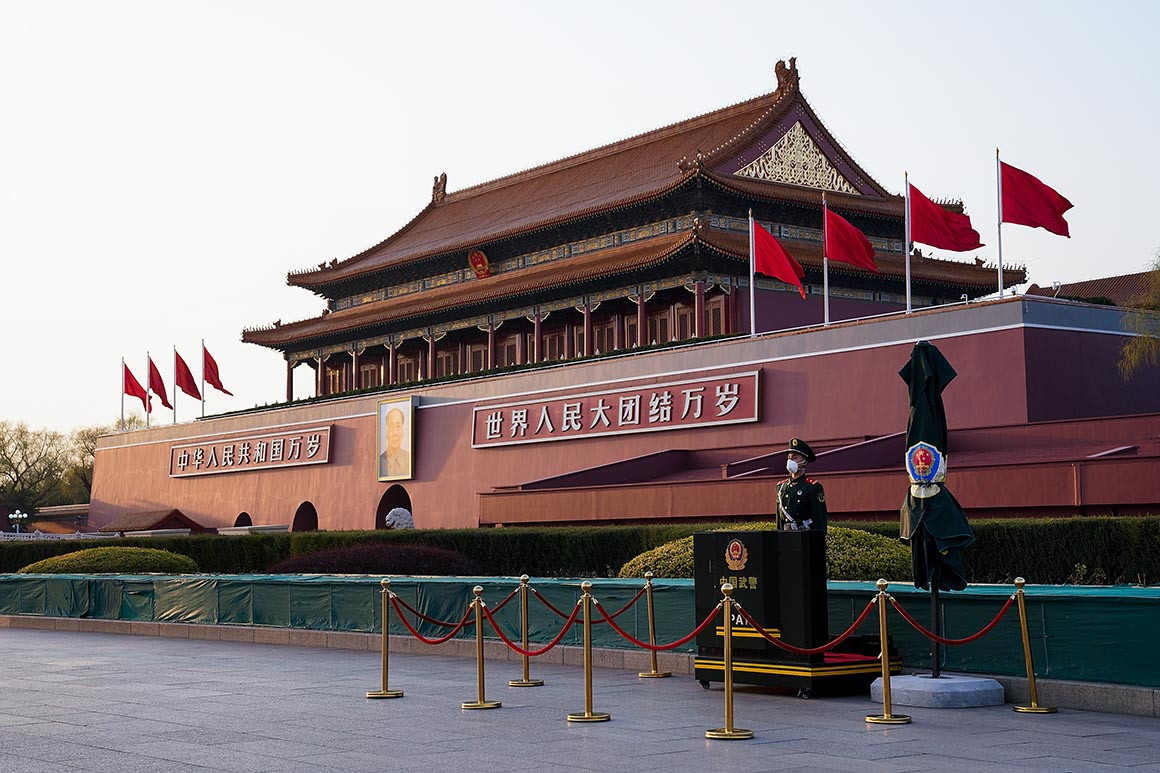 A new POLITICO/Morning Consult poll finds more voters view China as an “enemy” as Trump and Biden trade shots over who’s softer on the country.

Tiananmen Square in Beijing. Anti-China sentiment has risen in the United States as candidates use the country as a political foil in campaign ads. | Lintao Zhang/Getty Images

Anti-China sentiment is rising in the United States, according to a new poll that reflects the foreign country’s role as the point of origin of the coronavirus and the millions of dollars in negative ads spent by President Donald Trump, former Vice President Joe Biden and their allies as each paints the other as weak on the U.S.-China relationship.

For all the negativity, U.S. voters, by a 28-point margin, favor working with China to respond to the coronavirus instead of confronting the country aggressively.

“This is a trend to watch,” Tyler Sinclair, vice president at Morning Consult, said of the numbers.

The shifting poll numbers and the crush of negative, and sometimes misleading, advertising concerning China show the depth of its salience as a central issue in the presidential campaign. But unlike other matters in U.S. politics, the clash with a global superpower has worldwide ramifications that recall the hostilities of the Cold War and raise domestic political concerns about anti-Asian racism.

What’s next in U.S.-China relations.

By signing up you agree to receive email newsletters or alerts from POLITICO. You can unsubscribe at any time. This site is protected by reCAPTCHA and the Google Privacy Policy and Terms of Service apply.

U.S. perceptions of China have periodically worsened and improved over the years. But sentiment toward the country grew markedly negative after 2017, according to polling from Pew Research that now shows two-thirds of Americans have a negative view of China and only a quarter have a positive one. The spread of the coronavirus during a presidential election year “was just an accelerant” that made the tensions more pronounced, said Bonnie Glaser, a China expert with the Center for Strategic and International Studies.

“It has just caused the relationship to go into a virtual free fall and it’s hard to know where the bottom is. I don’t think we’ve hit it yet,” Glaser said. “The next six months is going to be a competition between the Republicans and Democrats over who can bash China harder, more effectively and show they can stand up for American interests better than the other guy.”

On TV alone, the two sides have spent and reserved about $6 million in ad time attacking both candidates over China, according to an analysis from Advertising Analytics. Factor in digital spending and millions more have been spent on ads featuring China in a negative light.

According to the Morning Consult poll, the two candidates are essentially tied on the question of who is trusted more to handle relations with China: 40 percent favored Biden and 38 percent favored Trump, a result well within the error margin.

Biden is under competing pressures to paint Trump as weak on China while remaining sensitive to Asian Americans who vote predominantly for Democrats. Progressive groups and activists that represent the interests of Asian Americans sounded the alarm in April over what they believed were racial overtones in an ad from the Democrat going after Trump.

“Trump rolled over for the Chinese,” the narrator in Biden’s web ad intoned, playing up the president’s mixed messages. “Trump praised the Chinese 15 times in January and February.”

After activists complained, the Biden campaign made sure to specify it was attacking the Chinese “government” in another web ad released earlier this month. The spot racked up 4.6 million views on Twitter, a high number for Biden. The Biden campaign also pointed out that he had criticized Trump for “hysterical xenophobia,” which the Trump campaign has flung back at Biden, claiming that the Democrat was criticizing the president’s travel restrictions to China. Biden disputes that characterization.

“The ad may use ‘Chinese government’ but the average American voter will still connect that to people that they perceive as Chinese on the street. We know that impacts many East Asians and Southeast Asians,” Pai said. “Our concerns remain. This China-bashing between the campaigns — we don’t think that is the right tactic, at least from the Biden campaign. I don’t expect it to change from the Trump campaign.”

Criticizing China on trade is a staple of Trump’s political career. As a businessman, Trump also had Chinese business partners and the Trump Organization and his older daughter, Ivanka, received patents from China during and after the 2016 presidential campaign.

Trump’s campaign sees China as a liability for Biden because of favorable statements he’s made about the country and because his son, Hunter Biden, had engaged in business in China while his father was vice president.

Biden is trusted more than Trump on containing the virus 42 percent to 35 percent and is seen as a better leader than Trump during a crisis by 44 percent to 38 percent, according to the POLITICO/Morning Consult poll. But Trump, by a slight margin, is viewed as better on the economy.

U.S. voters are deeply concerned with the coronavirus, and the poll shows 58 percent believe that the country should focus on working with China to combat the pandemic even if it means not holding China accountable for being where it orginated. Only 30 percent say the U.S. should focus on holding China accountable, even if it means not working with China to combat coronavirus.

Republicans are the most critical of China, with 55 percent saying the U.S. should hold China accountable even at the expense of cooperation on the coronavirus. Only 25 percent of independents and 12 percent of Democrats agree with this view.

The 31 percent of voters who see China as an enemy includes 47 percent of Republicans, 28 percent of independents and 20 percent of Democrats.

CORONAVIRUS: WHAT YOU NEED TO KNOW

Trump appointees interfered with CDC’s weekly reports on Covid-19 — and even tried to halt the reports altogether.

Amid the heightened tensions, China and the U.S. are competing to develop a vaccine, which concerns China experts like Glaser.