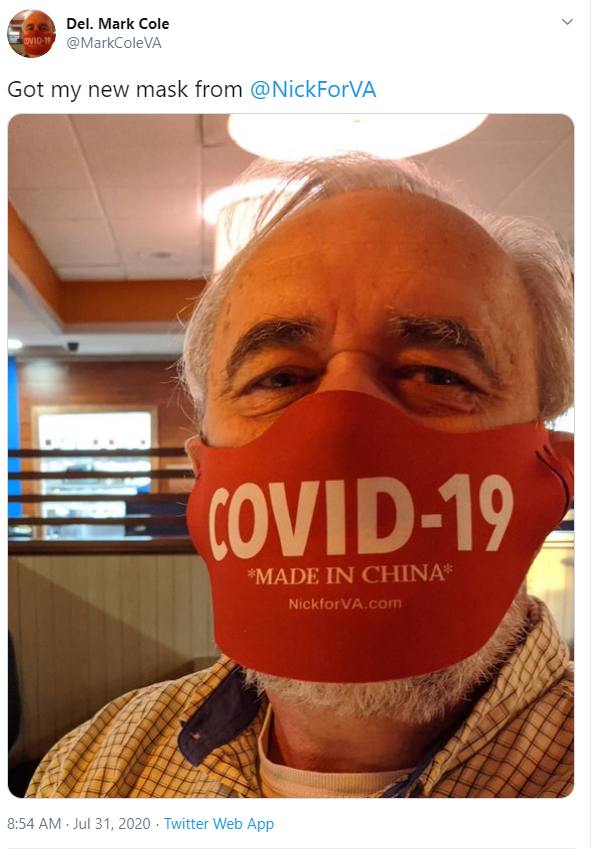 It was a selfie by Del. Mark Cole that first caught Sookyung Oh’s eye.

Oh, who is Virginia director of the National Korean American Service & Education Consortium (NAKASEC) Action Fund, said that she and other Asian American community leaders were “shocked” to find the masks for sale as campaign merchandise.

“He’s literally financing his campaign with a tactic that has been shown to exacerbate anti-Asian racism,” Oh said of Freitas, a libertarian-leaning Republican who is running against first-term Rep. Abigail Spanberger (D) in central Virginia’s largely rural 7th District.

In an open letter issued this week, the NAKASEC Action Fund called on Freitas’s campaign to stop selling the “made in China” face masks, saying the merchandise is another example of anti-China political rhetoric that has put Asian Americans at risk of discrimination during the coronavirus pandemic.

Some of the rhetoric has come from President Trump, who routinely refers to the deadly virus as the “China virus” and has also outraged his critics by calling it the “Kung flu.”

“Blaming China for the COVID-19 crisis in the United States has led to a sharp increase of racially motivated attacks and discrimination against people of Chinese descent and others perceived to be of Chinese descent,” the statement said, citing incidents in which Asian Americans have been spit on, cursed at or assaulted.

Freitas campaign manager Joe Desilets defended the masks in a statement, saying they are intended to target the “communist regime in China” that “lied to the world and enabled a deadly virus to spread, leading to a global pandemic.”

“This is the same regime that violently suppresses its own people, press, and scientific community. Nick will not hesitate to hold such a regime accountable,” Desilets said.

The “made in China” masks are on sale on Freitas’s campaign website as part of a $15 trio of face coverings. One says, “Don’t sneeze on me,” a variation of the libertarian “don’t tread on me” Gadsden flag, and another pairs the Texas battle cry “come and take it” with a picture of a hand-sanitizer bottle.

Cole, who has made the selfie his Twitter profile picture, said he got the masks after donating to Freitas’s campaign. He said it was “silly” for groups to suggest the “made in China” quip could encourage racial discrimination against Asian Americans, saying that the mask is “basically just stating a fact — the virus originated in China.”

“I think there’s nothing wrong with it, and I think it’s a good way to encourage people to wear masks,” Cole said.

Republican strategists have been expressly encouraging campaigns to focus attention on China rather than defend the president’s handling of the virus, according to one memo to GOP Senate campaigns that The Washington Post obtained in April.

Academics and Asian American advocates however, have drawn a line between anti-China political rhetoric and anti-Asian discrimination during the pandemic, accusing the president of contributing to the problem.

The FBI warned in March that hate crimes against Asian Americans were likely to rise because of perceptions that people of Asian descent were spreading the virus, citing cases in which Asian Americans have been assaulted in cases linked to virus fears. Even Asian American doctors and front-line health care workers fighting coronavirus have reported enduring racist tirades.

A spokeswoman for Spanberger’s campaign, Bettina Weiss, said Spanberger had “no comment on her opponent’s choice to sell novelty merchandise trivializing a global pandemic.”