Open Letter to the Biden Campaign on “Unprepared” 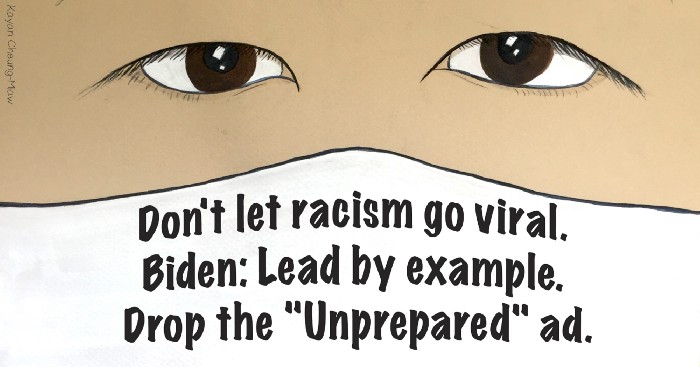 Open Letter to the Biden Campaign on “Unprepared”

To add your name to this letter, go to: bit.ly/unpreparedad

We are community leaders, educators, writers, and artists who are profoundly disappointed and concerned by the Biden campaign’s recent “Unprepared” ad, and its strategy to attack Trump on the grounds that he “rolled over for the Chinese.”

We share the Biden campaign’s goal of defeating Trump in November. And we acknowledge Vice President Biden’s leadership in condemning racism against AAPIs. We are concerned, though, that “Unprepared” feeds into one of the right’s core narrative strategies, which is to identify COVID-19 with China. Trump’s performance confronting COVID-19 will be a decisive factor in this year’s election, and given his failures, his only hope of reelection is to shift blame onto a scapegoat: China. By pushing a message that attributes Trump’s failures to his relationship with China, the Biden campaign reinforces Trump’s own core narrative. This may well backfire.

Ultimately, “Unprepared” plays to rather than challenges the right-wing nationalist movement and its worldview. We highlight a number of threats that emerge from this.

The threat of anti-Asian racism. When hateful rhetoric goes unchallenged, it leads to racism and violence against people of color. Black, Latinx, and indigenous communities have lived through these realities, and Asian Americans are no exception. The right’s attempt to blame China for the COVID-19 crisis in the U.S. has led to a sharp increase in racist harassment and assault of people of Chinese descent and others perceived to be of Chinese descent. One effort, Stop AAPI Hate, has recorded nearly 1500 such incidents in the past month. People have been insulted, spat on, beaten, and injured; in one incident a man attempted to murder a family, stabbing children aged 2 and 7, allegedly because he believed they were spreading COVID-19. The “Unprepared” ad may make this worse.

The Biden campaign’s “Unprepared” ad exacerbates anti-Asian racism in many ways, none clearer than when it implies that the country would have been saved by a stricter travel ban on China. This is misinformation that reinforces Trump’s racist and harmful efforts to identify the disease with China and Chinese people. Public health experts agree that travel bans are a poor tool for containing pandemics, and the outbreak in New York, the worst in the country, mostly came via travel from Europe, not China. The containment and mitigation strategies we most needed to see from the Trump administration have little to do with confronting China. The Biden campaign should criticize Trump’s catastrophic mishandling of COVID-19, but this should be grounded in real public health solutions to COVID-19, not racist misinformation.

The threat to the future of the Democratic Party. Playing to right-wing nationalism and fanning anti-China sentiment will also come at a cost at the ballot box. It will alienate not just Asian American voters, but also a broader population of progressive and antiracist voters, including younger voters. This jeopardizes the future of the Democratic Party, which lies in building a multiracial progressive coalition and bringing younger voters into the fold. The Biden campaign has demonstrated its understanding of this by reaching out to Senator Sanders and his base, and Vice President Biden himself has spoken out strongly against Trump’s xenophobia and racism, but the anti-China messaging strategy exemplified by “Unprepared” undermines those efforts. This is not just cynical, it is also short-sighted.

The threat to international cooperation and public health. Tensions between the U.S. and China have damaged efforts to confront COVID-19 by undermining urgently needed global cooperation around the provision of medical supplies as well as research into treatment and a vaccine. While many of us have been critical of the Chinese government and its initial response to the COVID-19 outbreak, it is clear that U.S.-China cooperation is an urgent and overriding priority until the pandemic is under control. State and local governments, hospitals, and civil society organizations across the country are building life-saving links to China and elsewhere in order to procure medical supplies and other resources, and the federal government has threatened these connections rather than supported them. This has made the country as a whole less safe. The Biden campaign should champion the need for international cooperation — particularly strengthening and supporting the World Health Organization — without undermining it by fueling greater hostility towards China.

Our demands: The country’s greatest priority at this moment is to beat the COVID-19 crisis, and this requires embracing principles of antiracist solidarity and international cooperation. The Biden campaign can and should beat Trump and the GOP with a message centered on our real public health needs and the progressive values that are required to meet those needs. The “Unprepared” ad must be taken down, and all campaign messaging that fuels anti-Asian racism and China-bashing must end. We refuse to allow the Biden campaign to sacrifice our dignity in the name of political expediency.